A Reflection of my Father

Before you go on and assume this is going to be some sappy, sad recount of my favorite memories written by the quintessential Daddy's Girl-- you're wrong.
I was not a Daddy's girl.
I loved my father but in a different kind of way.
Not because of anything my father DID... but because of the man he was.
And the man he was perplexed me.

My father was quiet, reserved, funny, soft-spoken, smart, talented and simple.
Of those, the only traits that I consider common are my humor, my intelligence -- most of which I owe to him... and my talents-- which he helped to nurture and grow as much as he possibly could.

I am loud. I am aggressive. I am spoiled. I am outspoken. I have no filter and I express my emotions as if they were on a flashing sign above my forehead.
My father was none of these things.

He liked to think before he spoke. Sometimes it felt like it took him forever to come up with a response. (forever in the mind of a young girl, that is) In many instances I actually assumed he couldn't hear me because it took him so long to respond. I was never like that.
He enjoyed the outdoors. We camped when my sister and I were younger but stopped once I reached the age where dirt and a lack of indoor plumbing became an issue. He loved it. He loved to camp and could probably have spent all of his time outside-- even in bad weather he found ways to enjoy it. I was never like that.
He preferred quiet solitude. He was not a recluse or shut-in, don't get me wrong. He just enjoyed being by himself and the peace of that. He got remarried when I was 18 (or so) and they found that comfort of being alone together. But he never sought out large crowds, or enjoyed big get togethers with friends. I was never like that.
He never shared his feelings. He didn't get mad easily and I don't really ever remember seeing him cry my entire life. He didn't even usually say "I Love You" when hanging up after a phone call. I was never like that.


I remember the first time he said "I Love You" when hanging up-- my mom and dad had just recently gotten divorced-- I was around 17. I said "I Love You" as I went to hang up -- putting the phone down to hit the "end" button-- I heard him say, softly, as the phone was a foot or so from my ear... "Love You, Too". I remember tears welled up in my eyes because I knew that wasn't something he did out of habit like most of us-- but he was genuinely trying to make me understand that he loved me, no matter what.


Despite all of our differences, he was half of me. Half of my heart.

Last March, I was 7+ months pregnant. I was at work when my dad called my cell phone to tell me he was in the hospital. I got upset and left work-- heading straight for the hospital, When he told me the doctors found a mass in his brain I assumed that it would all be okay in the end. But when the oncologist came in... my stomach dropped.
My dad was diagnosed with a Brain Tumor (GBM) and the prognosis was not good. He originally didn't want any treatment -- beyond an initial "de-bulking" surgery that only uncovered that the tumor was inoperable. I cried so much. I was pregnant with my first child and all I could think about was him missing the opportunity to meet her and be the amazing Grandfather I had watched him become with my sister's kids.
I guess I will never know exactly what changed his mind (many have suggested to me that it was my daughter's quickly approaching arrival) but he agreed to try one round of treatment-- chemo and radiation. It was so hard on him. He became frail and fragile-- something I had never associated with my tall, handsome, strong father before. I knew he wasn't going to keep going with the treatments but he was at the hospital the morning after I gave birth to welcome CD into the world.

A string of very unfortunate events landed my father in a Rehab center for the last few months of his life -- as he was not able to do most things on his own anymore.
He was already gone in a way. He didn't talk much. That was the hardest part. All I wanted was to joke with him, laugh, talk to him about his day and mine. Every time I went to visit I would PRAY that the Dad I remembered and grew up with would be in his room when I arrived-- each and every time. But he wasn't. He never was.

I lost my father this week but the man I grew up with and loved was really gone a few months ago-- and I can't decide if that is making this easier or harder on me.
I have had friends lose their parents suddenly and the shock can be the worst -- not knowing that someone is going to leave you and not remembering the last time you saw them or spoke to them or what you said. But I knew what was coming-- I may have been holding out hope for a miracle-- but I knew he was going to die. I knew for months. But when the Hospice worker called to tell me to bring my sister because he wasn't going to make it... There is nothing in this life that compares and nothing in this life that can prepare you for that moment. I couldn't catch my breath. It didn't feel real. But we were there and I held his hand as his breaths got more shallow...

But he lived a full life.
He loved and lost. He walked myself and my oldest sister down the aisle. He dropped all of us off at college and saw us all become independent adults. He met his first 4 grandchildren. He got to see a Formula 1 race-- which we all know was a big dream of his.

I will miss my father every day. Every. Single. Day.
Every time Basketball is on TV.
Every time I hear a Neil Young song... or Talking Heads, or Gillian Welch, or Alison Krauss, or The Beatles, or Frank Sinatra.
Every time I hear or see a fast car that I know he would have drooled over.
Every time I load the dishwasher. (It might be weird but he was very particular about loading the dishwasher and he taught me all of his tricks)
Every time I eat chips & salsa. (He would always sit in front of the TV with a bag of chips and a jar of salsa to watch a game or a race)
Every time I look down at my crooked pinky finger. (Its genetic. apparently)

The pain comes in waves. Debilitating waves.
In an instant. Your throat starts to close up and you feel like you can't catch you breath. Without even realizing it, there are giant tears streaming down your cheeks.
One second, you're reading a post on Facebook or watching TV and then suddenly you start looking like someone who just lost their father.

The hardest part is going on. Because no matter how dark you feel in that moment... the sun will still fall and rise, and a new day begins. The first of many to come when you feel guilty that the world keeps turning even without the man who was once my world.


Sorry if this post was depressing for anyone, but it was therapeutic for me to get these thoughts out. Almost like he could hear me.
I appreciate all of you who have prayed for me and my family. Sometimes when you lose something so important, you are reminded of all of the blessings you have--  And I am blessed with an amazing group of people around me. And for that I am thankful.

With Love,
J.
"Rest peacefully, Daddy. We miss you." 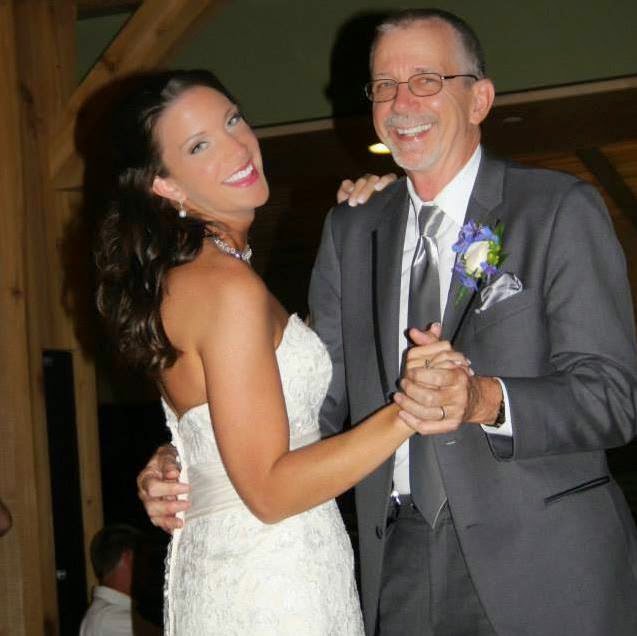